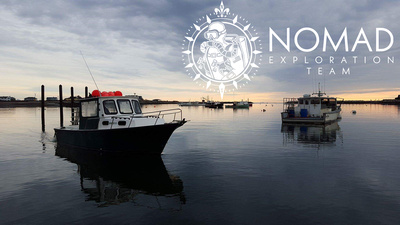 Diving offers an opportunity to see places that few people ever will. There is nothing quite like knowing that no one else has ever seen what you are seeing.

Most of us have been diving together on and off for more than 15 years. We'd bump into each other on different boats and chat about new wrecks, trade promising leads about wrecks we were looking for, and throw around ideas for where we might go next. The one wreck that kept coming up was the USS Eagle 56. We'd hear stories and rumors of crews looking but the wreck just couldn't be found. Over the years, we and other crews slowly whittled down the wrecks that were left to be found in Massachusetts Bay, where most of the boats were running. Slowly, we started talking about heading north in search of new wrecks. 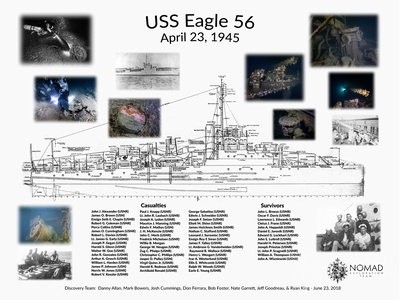 In 2014, Danny, Jeff, and Ryan decided to look for the Eagle 56. They loaded a 22ft boat with 3 divers, gear, and towed magnetometer (metal detector) and headed north to Portland, ME. Over the next 2 summers, they spent many days searching and diving targets without anything to show for it besides a long list of places where the Eagle wasn't. Simultaneously, they were looking for a wreck a bit closer to home, the collier William H. Machen off Portsmouth. At the end of the second summer, while they hadn't found Eagle 56, they knew that if this project was going to be successful: they were going to need a bigger boat (weather turns quick off the coast of Maine), they needed a team of like-minded divers, and this project was going to take a while.

They regrouped during the winter of 2015-2016 and came back in the spring of 2016 with a larger boat, Nomad, and started building the Team of divers as it is today. That summer and fall were focused on making sure we could safely do the types of diving that we were going to be required. A 200-300 ft dive in New England is no joke, the divers need to be confident that the boat crew is dialed in and that everyone is up to the challenge. Whether diving, running the boat, or doing research, each member of the team is an essential part of the overall success. In 2017, the team located and conducted the first exploratory dives on the William H. Machen in 300 ft of water of Portsmouth, NH. This was a great success, but it wasn’t the Eagle 56. She and her sailors were still lying undiscovered more than 70 years after her sinking. During the long winter, between 2017 and 2018 we all decided that it was time to go back to look for Eagle 56. Whatever it took 2018 was going to be the "Year of the Eagle."

So, what's next? The list is getting short in southern ME, I guess we'll have to head north again.