Discovery and Exploration of the SS William H. Machen 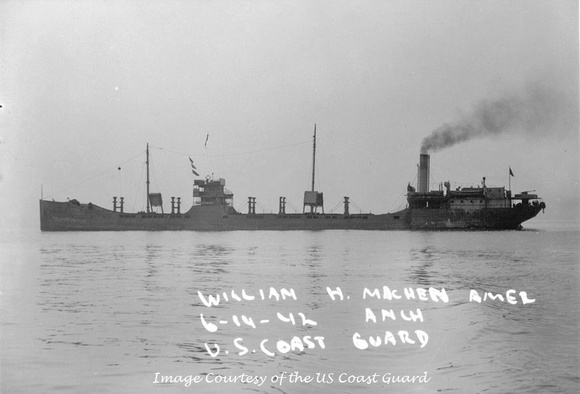 Check out the full gallery here.

This past summer a group of New England divers located and explored, the wreck of the SS William H. Machen (Machen) in 300 feet of water 75 years after she sank off the New England coast. On July 7th, 1942, the 360' Machen collided with the 218' general cargo freighter the Maid of Stirling owned by Stirling Shipping Company east of New Hampshire and Maine. The Sterling was not seriously damaged and continued on to port. Unfortunately, the mortally wounded Machen foundered and few details ever emerged about the collision itself or her final location. Lost during war time, with 44 other US merchant vessels loses in July 1942, the sinking of the Machen became a single line entry in a Coast Guard report and was largely forgotten.

Currently, the wreck lies partially turtled on her left side with a considerable portion of the wreck buried in the muddy bottom. Over 75 years on the bottom of the Atlantic has taken a toll on the wreck which initially hindered identification. Although the general dimensions and layout certainly suggested the wreck was the William H. Machen, the team spent the summer combing the wreck for more conclusive proof. 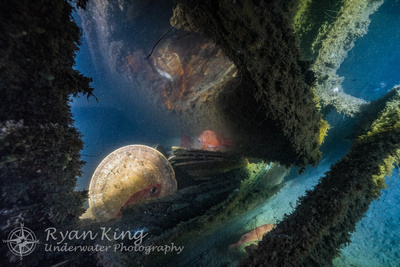 Exploring shipwrecks in almost 300 feet of water presents significant challenges. The pressure at that depth is 10 times greater than it at the surface. As a result, the divers' bodies absorb more nitrogen and they must ascend slowly and stop to wait frequently to allow the nitrogen to exit their bodies to avoid Decompression Illness or "The Bends."  Additionally, at these depths, the nitrogen in breathing gases becomes narcotic so team members utilized helium mixtures known as trimix in their closed circuit rebreathers to reduce any narcotic effects while diving. On a typical dive in late summer, when the surface water warms in to the low 60s, teams of two and 3 divers would spend only 25 minutes exploring this ship before beginning their two hour long ascent to the surface and the numerous required decompression stops. Early in the season, and as the water cools this fall, those dives will get even shorter as hypothermia becomes a concern during long decompression schedules.

“The depth and temperatures don't allow much time to explore on each dive. We feel very fortunate with the progress we made this summer and hope to get some additional exploratory dives in this fall. We'll spend the winter doing more research to try to piece together what happened back in 1942.” said team member Ryan King.  "There's still a lot to learn. We'll continue exploring this wreck for the next few years." 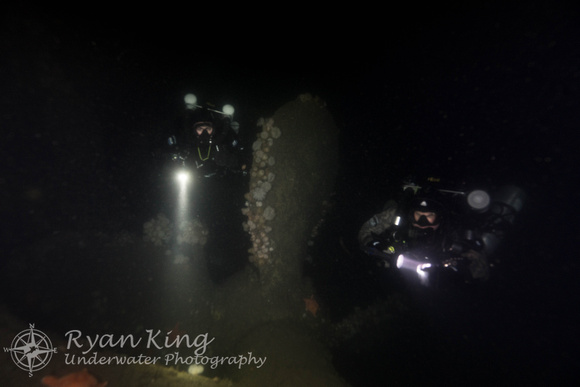 Members of the team began searching for the wreck in the summer of 2014 using a boat towed magnetometer (metal detector). Weather and other commitments prevented more than a cursory initial search. In 2015, with so little information to work from the team laid out a search grid the team began to "Mow the lawn" back and forth.

"After days running search lanes, we were able to eliminate a 20 square mile section of ocean and knew definitively where the wreck certainly wasn’t. It's monotonous work and unfortunately, it doesn't feel like you're getting any closer," said Ryan King. Without any additional information, the team decided to focus on other dive projects in 2016. The 2017 dive season began with a renewed focus on finding the Machen.

A few days before the 75th anniversary of the sinking, Divers Danny Allan, Jeff Goodreau and Ryan King along with Scott Morency at the helm made an initial exploration dive on, yet another, possible target.

“We’ve been searching for this wreck for a while and there have been a lot targets that didn’t pan out. When we first saw the wreck on the depth sounder, we knew we had something big. What we didn’t know was if it was a wreck or a rock. We decided we’d go have a look. As we passed through 260 feet, and the outline of the hull came into view, we knew it was a wreck but we didn’t know what kind. Visibility wasn’t great and we had no idea where on the wreck we’d landed so we simply picked a direction and started swimming. After a few minutes of swimming the enormous propeller came into view and we knew that this target was going to need more exploration” said Ryan King.

On July 7th, the team returned to the wreck, Danny Allan, Bob Foster, and Jeff Goodreau splashed while Ryan ran the boat. After a little less than two hours the divers surfaced with broad grinsl. When asked how it went, Jeff's responded "We got her. After all this time we've actually got the Machen."

Over the next few months, the team, including Danny Allan, Mike Barnett, Mark Bowers, Josh Cummings, Bob Foster, Nate Garrett, Jeff Goodreau, Ryan King, Scott Morency made numerous trips back out to the wreck splitting duties between diving, running the boat, and researching more information. In between each dive, the team spent time researching and reviewing video to plan the next dive. Each dive was a new ‘first’: the first time diving the bridge, the first time diving the stern deck house, the first time that visibility was clear enough to peek inside the wreck. It wasn’t until the team established a temporary mooring that they could return to the same location each time and begin to get a better picture of the wreck. Divers Robert Foster and Ryan King have been shooting video and stills that will be compiled to give a better overall impression of the wreck.

“It’s been a fun challenge to shoot this new wreck. Between the depth, the short bottom times and the visibility, it’s certainly, forced us to get creative,” Said Ryan King.   The general size, shape, and layout of the wreck suggested the Machen but it wasn't until a dish bearing the Pocahontas Steamship Company logo that he team felt certain that this was actually, the Machen. According to Ryan King “There is certainly a lot more exploration to do. We’re looking forward to it.”